Man-made climate change is, without a doubt, the single biggest crisis facing humanity, but it can seem very distant from our day to day lives. Exeter Young Green Tom Lyons has been helping us to visualise and understand what is going on in a region where the effects of climate change are all too real – the Arctic. He has spent the past 8 years investigating different websites and sources of data about how to read the Arctic. Our Co-Chair Joe Levy spoke to him to find out how we can all learn more about the most climatically unstable region on Earth.

Tom: I was interested in glaciers, since I started skiing in about 2001. I found a website, the Swiss Glacier Monitoring Network, where you can look at changes in all the glaciers.  Nearly all are shrinking and the biggest, the Aletsch glacier shows a clear exponential trend in reduction of its length. I also knew there were glaciers in Greenland and I compared lots of images of huge glaciers in the late C19th/early C20th and now and they’ve really disappeared up the fjords. I eventually found the Cryosphere Today website and learnt that the poles are monitored by satellites.

Joe: Why should people care about the Arctic speciﬁcally?

Tom: It’s so large that its melting isn’t just a symptom of climate change, it’s also a driver of its own climate change which is what we’re worrying about now.  The Arctic isn’t just sea ice, it’s the whole Cryosphere (the frozen area of the Arctic i.e. both snow covered land and sea ice). It’s so large that it changes the average reﬂectivity of Earth, so when there’s more ice it will reﬂect more light and heat, and when there’s less, more will be absorbed.  It’s like the thermostat that has a dampening eﬀect on the planet when it’s in balance with the climate forcing (climate forcing = temperature retention of the atmosphere). However, when that forcing changes too much, the Arctic can start to drive the climate itself in either direction.  Any negative feedback is not currently powerful enough to suppress the warming trend and won’t be until the Earth reaches a new equilibrium in energy balance.

An emerging positive reinforcing feedback (a bit like a vicious cycle) is methane released from thawing permafrost and undersea permafrost (clathrates) which is much more potent than CO2 although not as long lasting.  In fact it’s over 100 times as powerful as a climate forcing gas within a 10 year timescale.  There is the potential for large emissions of methane over a very short time scale.

Joe: I liked your analogy that the Arctic is the parasol that keeps the Northern Hemisphere cool in Summer.

Tom: Exactly. The North Pole in June receives over 500 Watts per square metre of solar radiation, whereas the Equator receives around 400W per square metre all year, but that’s because there’s 24 hour sunlight in June.  If that area had no ice, it would heat up pretty quickly come Spring.  Instead, it’s moderated; the temperature barely rises above zero, whereas over Siberia,  Alaska and parts of Canada, once the snow has melted temperatures can reach over 40C in midsummer,  away from the moderating effects of the sea and its ice.

It’s like if you’ve got ice in your drink, the drink won’t warm up until all the ice is gone but once it’s gone it will warm up relatively quickly. The last 8,000 years we’ve had a very stable climate.  Today we’re worried that we’ve massively increased the forcing of greenhouse gases in the atmosphere, from 270 parts per million of CO2 to over 400ppm now, rising faster than ever since the industrial revolution began.

The last time we had CO2 concentrations as high, the sea was 70ft higher. And we’re only just beginning to slow the rate of growth of our emissions.

Tom: the point is, the climate is playing catch up with what we’ve put into the atmosphere. The world’s climate has warmed on average over 1C above pre-industrial values (1.5 Celsius was the highest monthly departure from average in February 2016). It’s not a uniform rise in temperature either – there were times with temperatures over 30 Celsius above average in the Arctic. For context, Winter temperatures north of 80 degrees are on average -30C and summer temperatures of +1/2 C.  Moreover, the Arctic itself is still moderating that temperature rise, while simultaneously being a driver of it. So if you lose the snow and ice cover over the Arctic ocean, you might then have what we’re most worried about, the worst case scenario of perhaps a 5 to even 7 Celsius increase in average temperature worldwide, and we don’t think that’s survivable for civilisation.  It’s basically how far do you believe it can go wrong, and that’s an unproven thing because it hasn’t happened yet.

Joe: What particular things have you noticed this year in the Arctic?

Tom: the winter was the warmest winter on record by a big margin, largely driven by massive storms in the Atlantic, sucking air from the Tropics, straight to the North Pole, so it was breaching zero Celsius (i.e. Arctic Summer temperatures) in December and January. It looked like this year could be heading for a new record low.

Above: Satellite imagery of Storm Frank, which pumped warm air into the Arctic during late December 2015 (courtesy of the Met Office)

Joe: Where does the energy for melting the ice come from? What’s the balance between melting from ocean temperatures and melting from the atmosphere?

Tom: That depends on the weather. The ocean is much more of a constant temperature.  Melting from the underneath will be reﬂected by the sea surface temperatures and the surface layers mixing.  So at the moment you’ve got high sea surface temperature anomalies all around the ice, in areas where there isn’t as much ice as normal.  In the Beaufort Sea, North of Alaska, that opened up incredibly early, exposing it to the sun for a long time, which means it’s now 5+ degrees C above average.  The Kara and Barents Sea North of Norway have also been open for a long time, so that’s warmed up to over 8C above average in parts.  That is next to the ice, it’s not going to be directly melting the ice further in.  Clearly the ice is being melted from underneath but it’s quite hard to see the data of the water temperature under the ice at different depths, I don’t even know if it exists. There are still a lot of unknowns. The more high pressure (generally settled and clear skies with sunny weather) you get leading up to the summer, the more surface melt and melt ponds on the ice will form, allowing more melting momentum to be built up.

Joe: Based on what you can see now, what is your prediction for what sea ice will be by September this year?

Tom: It depends a lot on the next couple of weeks. The Arctic sun is dropping oﬀ quite fast, so in a few weeks it will stop having as much of an eﬀect.  It can also depend on the weather. The general outlook I have is it’s going to be one of the top 3 lowest sea ice years, potentially the second lowest, because there’s a big chunk of ice that’s breaking oﬀ into the East Siberian sea, which looks like it might fully melt out. It’s doing better on the Atlantic side than it is normally, which is strange because that’s the area that had the highest positive temperature anomalies over the winter – 20, 30 Celsius above average. More importantly is the year to year trend and it looks like we’re on the next downward drop in this sort of ping-ponging cycle that it has set into now.  What happens next year and the year after?  We’ve just had an El Nino with high temperatures worldwide, the effects of which could take a few years to equal out and feed into the Arctic if indeed it does at all.  In 2010 we had a record hot year but not a record low in sea ice until 2012.  I think we’re probably looking like we’ll have the next record low in 2017 or 2018 if the pattern repeats itself.  As is normal, you’d expect it to rebound to some degree afterwards and then continue on its downward trend.

Joe: But not as much as it rebounded the time before.

Tom: Each high and each low is sort of hemmed in, heading down. What happens next is more important than what is happening now, and it will keep being like that. We don’t know what necessarily will happen.

Peter Wadhams (Professor of Ocean Physics at Cambridge University) interviewed about his predictions for the Arctic’s future.

Joe: None of this has happened in human recorded experience before, this will be a ﬁrst.

Tom: Another thing I’ve been trying to get my head around, if scientists are concerned about runaway climate change, then surely with similar situations in the past, the same thing would have happened then, with runaway warming triggering a methane release.  I even emailed Peter Wadhams and he said they basically don’t know.

There’s so much we don’t know. We sort of have to wait and see what happens.  Either way we are close to losing all of the sea ice in Septembers to come.  There is only about 30% of summer ice left in the Arctic.

Without a powerful negative feedback cycle in place, logic dictates that an almost ice free Arctic is only one more hot Arctic summer away. 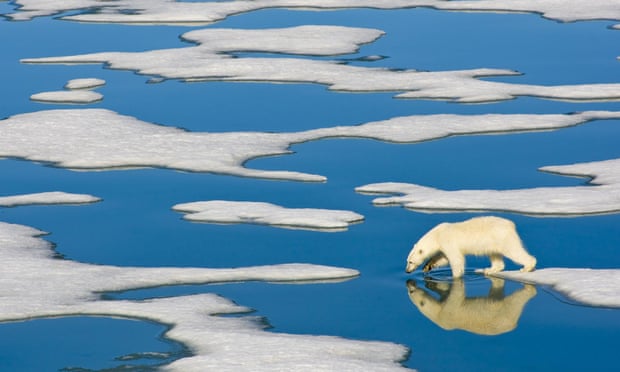